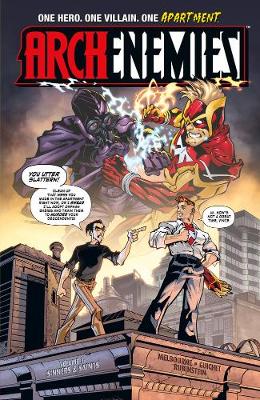 Thick-headed Ethan has no idea that his roommate, Vincent, is the megalomaniacal Underlord. Self-absorbed Vincent has no clue that Ethan is the stellar-powered Star Fighter. As hero and villain, they're mortal enemies, but as roommates, they REALLY hate each other. Join comicdom's ultimate odd couple as they fight to keep their secrets secret and learn to live together in peace. PLUS: an origin, a power-up, a team-up, a break-up, a breakdown, a betrayal, a helpful fashion tip, sex, violence, vandalism, death, some jokes, young love, a whole lot of lies, and epiphanies all around. (Though not in that order.) • Collecting the four-issue mini-series that BrokenFrontier.com calls 'a deviously twisted tale . . . with more layers than a wedding cake.' • Written by rising star Drew Melbourne, with pencils by Yvel Guichet (Superman, JLA) and inks by comics veteran Joe Rubinstein. Text and illustrations of ArchEnemies™ © 2006 Drew Melbourne.