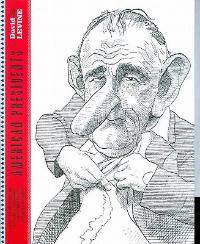 By David Levine 'More than any other caricaturist, Levine has a fine eye for fraud. Let a statesman parade false affability, false humility, or false sorrow, and Levine will make it into a mask… Levine is a man of protest-passionate protest. And these drawings, more than anything else, are a social history of protest-especially as the artist felt it.' - John Kenneth Galbraith For more than a half century, David Levine has taken on the most powerful men of the free world with only his pen and a bottle of India ink. That pen has proved to be mightier than the sword as Levine skewered, illuminated, satirized and condemned every president of the 20th century, as well as the most significant presidents from colonial times and the Civil War era. His drawing of Lyndon Johnson revealing a scar in the shape of Vietnam is considered one of the most recognized (and most copied) of the Vietnam era. His devastating wit and delicately cross hatched drawing have exposed the venality of the Nixon administration, the phoniness of the Reagan years, the duplicity of the Clinton era, and the evil of the Bush cabal. Nine administrations have come and gone during Levine's tenure, and with a new one on the horizon, the artist remains, unbowed, unfazed, and unrelenting. Now for the first time, the best of Levine's five decades of portraits of American Presidents and their administrations are gathered in a comprehensive and visually dynamic book. From John Adams to George Bush; from John Quincy Adams to George W. Bush; from the Great Emancipator to the Great Society, Levine has captured them all including present day candidates John McCain and Barack Obama. David Levine is internationally renowned for his incisive caricatures of world figures in literature, politics, and the arts. For 45 years his work appeared in every issue of the New York Review of Books, and his drawings have been reproduced in Time, Newsweek, Esquire, Playboy, The New Yorker, New York Magazine, The Nation, and many other publications. Levine is perhaps the most influential caricaturists of the late twentieth century.

A LETTER TO JO

A VISIT TO MOSCOW